Ozone (O3) is a form of oxygen that has one more oxygen atom than the atmospheric oxygen (O2) we breathe. It’s this third oxygen atom that makes the ozone molecule so unstable, which is the key to its oxidizing power. Since ozone is unstable, it has a fairly short half-life under normal conditions, so it has to be produced and supplied continuously to a disinfection process.

This is where OZONE ENGINEERS comes in: OUR systems manufacture and deliver ozone in exactly the right quantities to provide the needed disinfection power for a given application.

Ozone is an unstable molecule because the 3rd oxygen atom is connected to the other two atoms with a weak bond (symbolized by the single line in the diagram). The weak bond is why ozone is such a powerful sanitizer, as shown below. 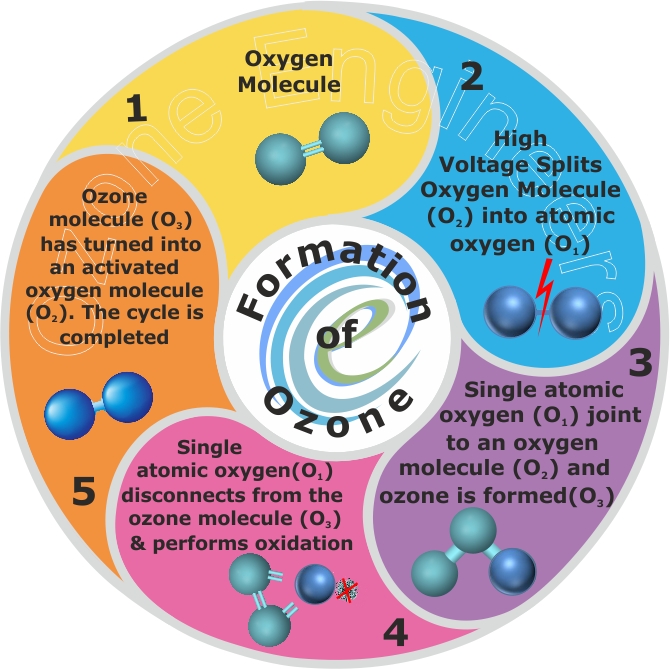 How Does Ozone Work

The unstable third oxygen atom can combine with organic and inorganic molecules to destroy or change them through oxidation. This process happens almost instantaneously. For example, ozone in a swimming pool will kill Cryptosporidium parvum practically on contact, whereas chlorine in normal pool concentrations would take hours to kill it. Like chlorine, ozone is “used up” in the oxidation process, and has to be re-supplied.

Ozone oxidizes a very large range of other substances. In a pool, these organic molecules can be viruses, bacteria, fungi, yeast, oils, organic chloramines, etc., and inorganic molecules can be dissolved metals such as iron, copper and manganese, and inorganic forms of chloramine. On a food preparation surface, or on the food itself, the target organism might beSalmonella, Listeria, E. coli or any number of other dangerous microorganisms. In hospital or long-term care laundry, the ozone kills the dangerous antibiotic resistant staph bacteria (MRSA) that can be carried on clothing or bedding.

The chemical process of ozone oxidation is relentless. It continues until the ozone is completely destroyed (actually, it is “reduced” in the process of “oxidizing” other substances). When this beneficial third unstable atom completes its oxidizing duties, it leaves behind only the familiar oxygen molecule like the ones in the air we breathe, O2.

Ozone disinfection is effective, safe and reliable. An ozone application is often your most cost-effective and environmentally friendly (Green Technology) way to be absolutely sure when clean in critical.

The potent disinfecting power of ozone can benefit the environment in many important ways. Ozone can replace chlorine, hot water, and steam in many applications thereby reducing the consumption of chemicals and water, as well as eliminating the energy required to produce hot water and steam.

The Benefits of Ozone

Ozone is the Environmentally Preferred Sanitizer

For all its inherent power, ozone sanitation has no negative impact on the environment, either for its operators or for the people who benefit from the disinfection process. Ozone benefits the environment both by reducing the use of energy to heat water and lowered chemical consumption and because it creates no harmful byproducts. The oxidation process reduces the ozone, leaving behind only oxygen.

Ozone has existed in nature since lightning first arced through an oxygenated atmosphere, and has always been easily identified by its unique smell, even in small concentrations. But only since the advent of scientific research and technology has it been identified and understood properly.

Ozone Identified as a Distinct Substance

Ozone was first identified as a distinct chemical substance by the German scientist Christian Friedrich Schönbein in 1840. In his experiments with electrolysis and electrical sparking, he recognized a scent as the same odor found after a lightening flash. He named the substance “ozone” from the Greek term for “smell”.
However, Schönbein did not know what the nature of the substance was. From his own research, he noted that the ozone scent was detected as soon as the electrolysis of water started. He executed a number of experiments using a variety of electrolytes with chemicals in solution, and exposed the ozone to other chemicals after it was produced.
He found a number of results that we now understand much better, although at the time he did not find the correct explanations. For example, he noted that the ozone smell was not created when using chemical solutions of ‘halides’. Remarkably, from these kinds of very elementary findings, he suggested that the substance’s odor “must be due to some gaseous substance disengaged (conjointly with oxygen) from the fluid due to the decomposing power of the current.” *

The Synthesis of Ozone

The chemical identity of ozone (O3) was finally identified by Soret in 1865, and the result was confirmed shortly before Schönbein’s death in 1867. Technology has progressed a long way since then, though the basic techniques are the same.
At its most basic, industrial ozone is created by flowing oxygen between a charged anode and cathode pair. The electrical field breaks the oxygen molecule (O2) into two oxygen atoms (O) which instantly form a weak bond with an ordinary oxygen molecule to make ozone (O3). This method is similar to the action of lightning surging through the atmosphere.